When I went to Sydney we went to my mother in law. She has a thriving vegie garden and gave me some spinach, rainbow chard and shallots from it. I was so grateful. I hadn’t had time to do anything with them yet. When I got back from Sydney, I washed it all and place it in my trusty Tupperware containers.

Finally yesterday I had a chance to do a bit of cooking, but what was I going to do with it? We don’t eat spinach usually; I have never used rainbow chard, shallots I use a lot so they were ok. I decided to start with sautéing the spinach.

I place 4 cloves of crushed garlic and one diced onion in a frying pan for a few minutes. I added the spinach and about 1/2 cup or less of chicken stock. I didn’t measure it properly. I stirred it occasionally whilst simmering it on low for about 5 minutes.

First off I made some spinach and ricotta rolls. 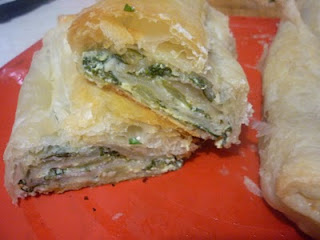 I mixed some of the spinach with some ricotta (probably 1 cup spinach and ½ cup ricotta) and 1 egg. I mixed it well to combine then spread it over a few puff pastry sheets.

I rolled the sheets up and pressed the ends together. I baked them in a moderate oven for 20 minutes until they were nice and golden.

Next I made a spinach and ricotta frittata/crust less quiche thing. 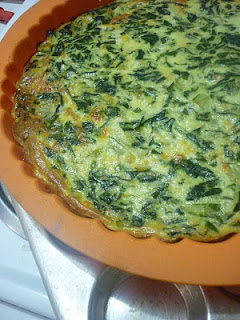 I don’t know exactly what I did, but here’s roughly what I threw in...
¾ cup cooked spinach
3 eggs
1 cup milk
1/3 cup ricotta approx
1 cup mozzarella cheese

I mixed it all together, placed it in a pie dish and baked in a moderate oven for 40 minutes until it was golden brown. 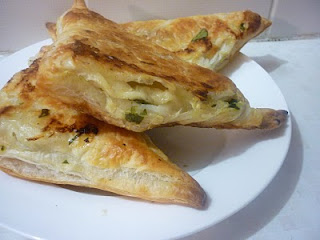 Finally I made a few spinach and ricotta puffs with some of the puff pastry. I had a little ricotta and spinach left, so mixed it together and put it in the middle of some puff pastry squares. I folded them in half and pressed the edges together. I put them in the oven for 2o minutes, turning once.

In the next few days I will use the rainbow chard. I have a few ideas, hopefully they work!
Posted by Kylie at 11:02 AM