I got this wooden crate a few years ago and always meant to turn it into a toy box, but never had time. Originally I was going to sand and stain it, but since I can't do that around my kids I had to think of something else. 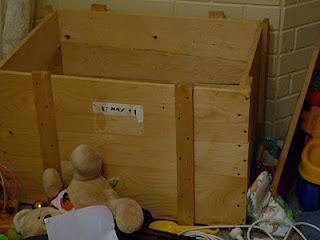 Firstly I had to pull all the nails out of the lid and sand it. I forgot to take pictures of the stages of the lid. I was just too excited that I had time to do something to this box!

After sanding it I cut out some foam. I used one of the cushions from my lounge suit I am about to take to the tip. I didn’t know what to cut it with, as I don’t really have any tools, so I used a big kitchen knife! It did the job. I cut the foam to size and placed it on the vinyl.

I bought the vinyl back when I got the box. It was a cut off I picked up for a few dollars, which I immediately planned to use for the cushion top lid. It managed to sit in my cupboard for 3 years before I got around to it though!

So I laid the vinyl on the floor, cut it to size and sat the foam on it. Next I placed the wooden lid on the foam and pulled up the vinyl to cover it all. I used a staple gun to attach the vinyl to the wood and keep it all secure. 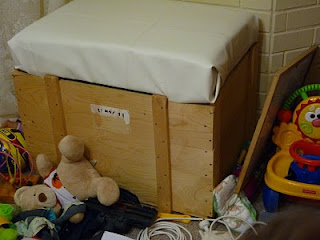 With the actual box part I cut some of the wood that was sticking out the top to be flush with the rest of the box. Then I sanded it all down. I was so lucky with the Winnie the Pooh fabric. My sister in law was getting rid of it a little while back so I got it for free. 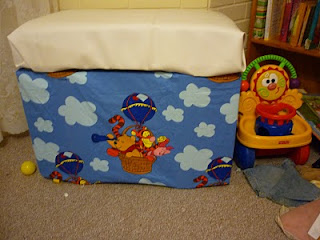 There was enough cover the box. I used a staple gun to secure it and that’s it! I have hinges I am going to put on it as well, but it was getting late and my daughters needed to go to sleep. They love their new toy box and it is easier to get them to clean up now!
Posted by Kylie at 9:29 AM