Awesome weekend and it's chain of events 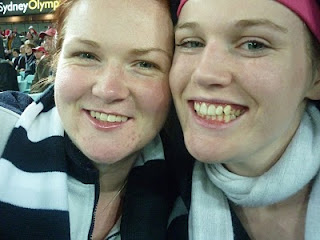 This is me and Lambchop at the footy on Saturday. We go for Geelong, who kicked butt! YEAH. lol.

I have always wanted to do a spur of the moment "lets go on a trip" thing. On Saturday I got to.

My dad gave me free tickets last week and a few days later it turned out I couldn't go. I meant to ask Lambchop if she wanted them, but forgot.

Friday night was a shocker. My daughters didn't sleep, so I got no sleep until 5am, which led to me sleeping in on Saturday until 2pm.

2pm my alarm went off for the footy, which I was not going to anymore. Then Miggles rocked up. She came to drop something off and said "Aren't you going to the footy?" I explained what happened and her response "Why didn't you give them to Lambchop?"


Damn, I forgot to do that! So I rang Lambchop. "Wanna go to the game tonight, in Sydney? Starts 7, I've got 2 free tickets for you?" Her hubby, C, was working til 5 so she wouldn't make it.

Lightbulb moment, why don't we go together? So she called C to check if he was cool with that. I think he was a little shocked, but cool with it.

I think both our husbands were a little, what? What do you mean now? It was such as sudden decision and to make it on time we had to go NOW!

So Lambchop and I raced to get ready. First though I needed Geelong gear. I raced to a friends and borrowed their hat, then raced to my parents. I had tried calling them, but no answer. I rocked up and knocked. I knew they weren't home but didn't know if one of my many siblings might be there.

No one was. What to do, what to do. Simple, break in. I have never lived at this house, but I have broken in. I am sure they were expecting me. There was Geelong gear hanging at the front door. For me, right?

Ok, no, it's always hanging there, but still, it's all good. I really need to return it actually.

Anyway, got to Lambchops and we went to the game.

It was awesome. We won and we were sitting in the opposing teams areas so it was doubly sweet! lol. I also loved the fact that it was my first game and they won, whereas Lambchop had been to a few where they lost. Plus we got pretty close seats which was sweet.

It finished about 10pm, and we were driving straight back. This made me glad I had no sleep the night before and had slept all that day. I was not tired.

On the way home, we are chatting away, then we saw them. Police. Sitting under the bridge, where according to Lambchop "they always are." Ok, I lived in Syd and drove to Canberra pretty much every month for 3 years and they were NEVER there. I have been to Sydney 3 times in the last month and they were not there. In fact they have NEVER been there when I have come from Sydney to Canberra.

So usually I am sitting on about the speed limit so not a problem. Not tonight. Of course, when I actually see the police, I am speeding, and not just 5kms over or anything.

I slow down as I pass them, hoping they won't follow me. No such luck. They turned around and I pulled over.

He did the usual police talk, I gave him my licence and he went back to his car. I am so dead.

I hear the other cop say "consider it a present." My thoughts, Yay! I'm getting off! Lambchop thought the opposite. That is not a funny joke when you are booking someone!

Are you serious? That's right people. He was a NICE cop and let me off! And yes, I did not speed the whole way home.

Awesome weekend. lol.
Posted by Kylie at 9:28 AM