I thought I would share with you some of the things we ate this week whilst doing our challenge. I will say straight up we didn't quite stick to our $21 budget and there is 1 reason for that. I know when I know not to take my husband grocery shopping, but I did. And I did it on our anniversary. It was only $13 extra, so not a huge blow out. And hey, its better than the $150 - $200 we've been spending lately.

I could make excuses such as it was our anniversary, it came out of his sanity money (it could, since he doesn't usually spend it) BUT I decided to just suck it up. Why? I'm not perfect, and sometimes as much as we try we don't get to stick to the $21, but the fact is we did save on our usual shop and that was the main aim. 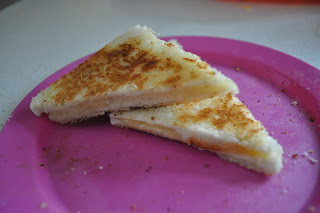 Toasted Cheese Sandwiches
Now, back to what we ate...

For breakfasts we had cereal, toasted cheese sandwiches, scrambled eggs, rice (my kids requested that one, so hey, why not?) as well as fruit, normal sandwiches and yoghurt. Not all on the one morning! Those are just things we ate this week.

For lunch we mainly had sandwiches or left over dinner. 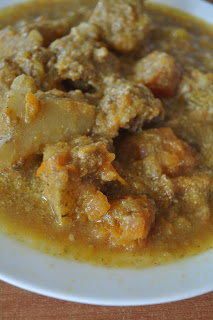 Curry
For dinner we had
Bacon and sun dried tomato risotto (which made enough to be frozen for a meal I am planning later)
Beef curry which made enough for 2 more meals
Corned beef with rice
Pumpkin soup
Chicken stroganoff (the beef I have is only good for slow cooking, not a quick meal like this)
Fried Rice
Spaghetti bolognaise 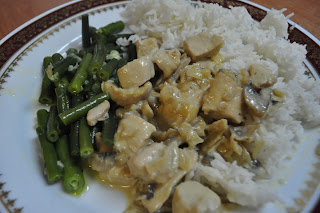 Chicken Stroganoff with Garlic Beans and Rice
By having meals with similar ingredients (such as curry with pumpkin followed by pumpkin soup with cream followed by stroganoff using the rest of the cream) you stop food wastage and you are not having the same thing every night.

I'll be trying to keep my groceries to a minimum over the next few weeks to use up what we have and save more money.

You don't need to spend a fortune on food to eat well.
Posted by Kylie at 11:23 AM