Exciting things are happening! Laundry before and after

My husband lost his job! Ok, that is not the exciting part. (If you want more details on the job loss click here and to read about our action plan click here.) Anyway, the exciting part is he now has time to do stuff around the house. Today the gardens are getting cleaned up, greenery removed and the weed mat put down next to the drive way. Plus if things go well there are a few other things which will be done inside.

He did have 4 hours work at some cold storage place this morning. We had no idea how long he would be working, but had decided last night we need to get this house ready to sell asap. We’d rather sell it whilst we can than lose it to the bank if we can’t afford to keep it.

So whilst he was at work I removed the scummy shower curtain rail. It has not been used since we moved back and was one of those things we planned to do and just never did. I scrubbed pen marks off walls. My youngest has destroyed all our walls with her ‘creativity’.

I also decided to tackle the laundry. One of my issues with it was the lack of storage/shelves/anything. It felt too small to do much, but I wanted to put some shelves up. They had been sitting there a while, so I got out my husbands drill and did it.
I forgot to take a real before shot, but remembered when I was doing it so our sort of before is this one, with 1 shelf already up.

As you can see there is stuff on the hot water system, usually my washing powder and things are on there too, but I moved them, so I could place the drill there. The chair is my ladder.
Now the after with my shelving...
The other side of my laundry looked worse. I had stuff in boxes on my dryer and just nowhere for anything.

Ok, those two slim brown boxes are the shelves, and the chair is not normally there either, but still it was not a good laundry...
(The yellow bucket lives there for various reasons and the blue thing is the pipe to direct the lint stuff out of the dryer, it extends, but rests there for easy access, although it doesn't get used much.)
So our laundry is looking much bettter, we took 1 load of greenery and stuff from the yard to the tip and have started on another thing we are hoping to finish tomorrow, so I will show you before and afters of that too.
The plan is to get it finished in the next month. The job loss has certainly proven to be a big motivator.﻿
Posted by Kylie at 8:09 PM No comments: Links to this post 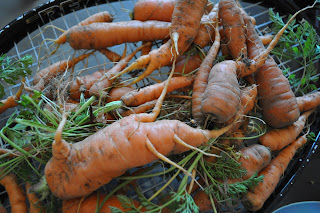 Check these out. I was at my sister in law and brothers house last weekend and these were on the table. Home grown carrots. We got to wash and eat some. It was so nice to eat a real carrot. It was sweeter than the cheap shop ones and such a novelty to eat something they had grown.

They have a few beds and various things in them, so it will be interesting to see what they produce.
Posted by Kylie at 7:41 PM No comments: Links to this post 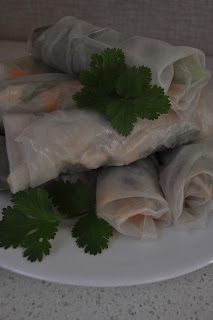 I have wanted to make these since I was a kid. Not sure why it has taken me until now to make them but I am glad I finally did. They were much easier than I expected and even tastier than I thought they would be.

Place the rice paper sheets one at a time into a bowl of warm water to soften. Remove and place on a damp towel.
Place the lettuce leaf then other ingredients on the the paper sheet. Fold on part over to cover the ingredients, then fold in the sides and roll up.

That was it. It is so easy. The packet actually said to use prawns, but my husband is allergic.

I mixed a little gluten free soy sauce and some honey together to be my dipping sauce and ate a few. They were surprisingly filling!

You could experiment with different fillings and sauces. Use whatever you have and whatever you like. I plan on doing a sweet chilli sauce next time.
Posted by Kylie at 10:09 PM 1 comment: Links to this post 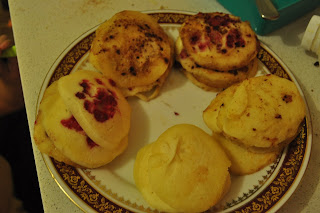 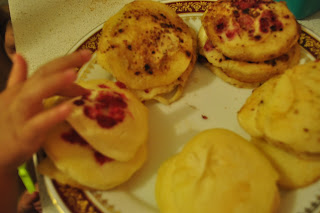 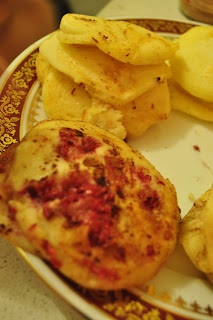 Posted by Kylie at 5:56 AM 2 comments: Links to this post