Eating gluten free is not always easy and most 'normal food' options such as bread and pasta cost a lot more when made gluten free. I have tried a few different gluten free breads and they all taste kind of heavy. I have made some myself and loved the results when fresh out of the ove, but once cool they weren't fantastic.

Last week I decided to buy a box to make crusty gluten free bread. The brand I used was called Simply Wize and it turned out great. 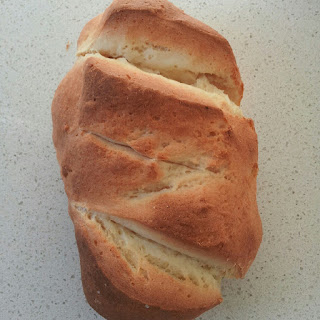 I'll be honest, I completely did not read the box before attempting it. Had I read it, I would have realised I needed yeast, there was not sachet in the box. Lucky for me I had some in the fridge. Unlucky for me I had no idea how old it was!

I also would have read (and had my memory jogged) that I needed to let it fizz up in the warm water. Instead, I just dumped the lot in the bowl, then went "Oh, dear. Hope this works!"

I kneaded it all, praying the whole time it works, because I wanted bread and did not want to go down to the shops. The odds were against me with yeast so old I can't remember the last time I had used it before today and not following instructions, but you can live in hope right?

It came out beautifully and costs less than $3 a box I think. I plan on making it again, but next time I will read and follow the instructions. I can honestly say this has been my favourite so far and I plan on experimenting with seeds and things next time too.

Also, once I pulled it out of the oven and it cooled, other family members cut themselves some (much to my disgust because it is gluten free FOR ME!!! And I had just made them some 'normal' bread rolls!) They all loved it and were surprised when I told them to back off, it's my bread! They said it was the best gluten free bread, it didn't even taste gluten free.

Just so you know, I haven't been paid to write this. I saw the box and decided to try it. Had I been paid, I probably would have done it right and read the instructions.

I plan on having this instead of buying ready made gluten free bread from now on.
Posted by Kylie at 8:30 PM