Are anti-ageing products worth it?

I am paranoid about looking old. I used to often feel old. I have been mistaken for being 34 before and a few times people have guessed my age to be in the 30's. I am currently 28. I was 27 when someone thought I was 34. Not cool.

As such, anti ageing products have been on my radar a fair bit. At Christmas someone thought I was 34, so I started using products religiously! A few months ago, someone guessed me to be the younger sister out of my 25yr old sister and I. I was ecstatic.

I have often been told that I seem old for the following reasons:


Despite the reasons people have given me as to why they think I am older than I am, it still makes me feel old to often have people guess my age at 5 - 10 years older than I am.

So I have been experimenting. I tried Clinique products with some success. I was given them for free, so figured why not. The ones that have had the most effect though are Skinstitut, particularly Eye Believe, Retinol and Vitamin C. (3 products for $45 is pretty good too!)

Here is a picture of my eyes, close up about 2 months ago. 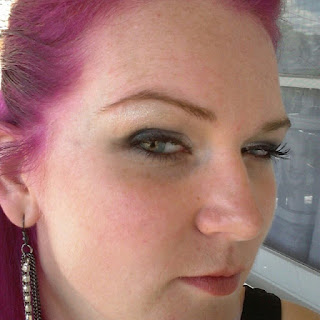 I have only fine lines around my eyes. They are more noticeable when I smile. I am ok with them as they are smile lines, but if I can stop them developing more for some time, I will. 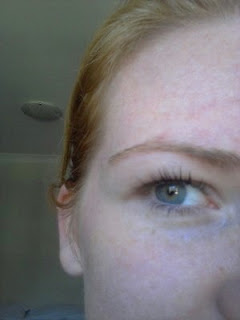 I took this today. The fine line just under my eye has pretty much disappeared and the fine crows feet are basically gone. My forehead wrinkles are decreasing and I have not even been using the creams every day! I am so impressed.

I have used other anti-ageing products which cost a whole lot more and was less than impressed. I am vain and I will fight ageing as much as possible. Overall, I think most creams are a crock and just overpriced sorbolene. Having seen the difference in the pictures for myself and having been able to visibly see my face change in my mirror, I feel these ones are different.

I didn't get paid to post about them and it is not an affiliate link. I just wanted to share how impressed I am with them.

Do you use anti ageing products? Do you think they work or are a waste of money?

Starting with the naturopath, I managed to overwhelm her! I felt a little bad about that and didn't mean to. She is part of a program here for women who have been victims of certain crimes, so she had my file and it contains a lot. That alone was shocking to her. (I was accidentally left alone with my file later and when I read it, seeing everything in black and white really upset me and I saw what has happened to me through someone else's eyes and it was scary.)

Anyway, aside from my shocking file, she had to do a medical history, as well as current eating/sleeping habits. I am pretty bad and she wanted to know about parents, siblings, aunts, uncles and grandparents, so any 'family' diseases.

I have had issues with sleep since I was 14. I have PCOS (Poly Cystic Ovary Syndrom). I have Borderline Personality Disorder. My mum and gran died of cancer, my grandfather of a heart attack, my other grandfather and an uncle have had strokes. There were other things too, but you get the idea. The only thing she got to put down a no for on her form was diabetes. As far as I know no one in the family has it and she seemed very relieved.

Now, I have been pretty stressed lately. When I get stressed, I don't eat and I don't get hungry. This combined with no sleep means my body should be pretty ragged.

For some reason, it is all still functioning fairly normally and it didn't make sense to the naturopath. I have had a few break outs and spots on my body (some little red dots in my elbow crease which I've never had before.)

She checked my blood pressure which was on the low side, pretty unusually for someone with the stress levels I have. Next she checked my eyes. I am physically very strong, but have a lot of stress rings, which is no surprise given everything going on in my life over the past 7 months.

She got so overwhelmed she asked if I could sit in the waiting room for 10 minutes while she thought about it all. 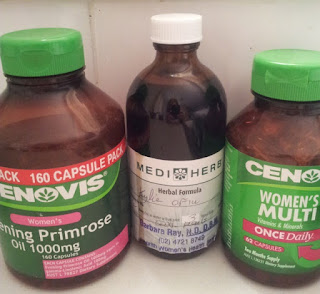 Vitamins and herbs I am taking

In the end, a meal plan was worked out, with protein shakes since sometimes I literally cannot eat. I have pretty much been living off protein shakes prior to seeing her, as it seems to be the only thing I could stomach. She gave me some herbal liquid which tastes foul but should help relax me and fix a couple of issues and balance me out. 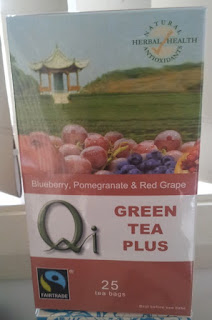 Green tea through out the day was recommended, with chamomile tea at night, plus I used to take a multi vitamin and evening primrose oil, since I still have them I should be taking them too. I have never really been a tea drinker (raised Mormon!), but have had herbal teas at different times. I didn't think I could do plain green tea, so picked the one above, which is Fair Trade. 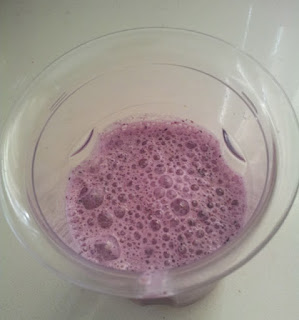 Today was day 1 of the new plan and I did pretty well. I had a smoothie for breakfast, although I was unable to finish it, it was a start. I ate a mandarin and 2 rice cakes with avocado as my snacks during the day. Lunch was a protein shake and dinner was chicken with broccoli, zucchini and corn. I feel so full, but am pretty happy I was able to eat that much. It is a pretty big deal for me. 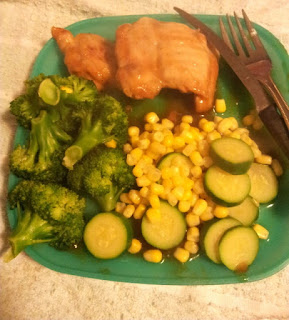 This is a kids plate, I'm classy like that :)

I have a few exercise goals and am trying to slow my mind down a bit and just be more healthy. I think it will be interesting to see how the herbs and things go.

What my bedroom says about me

I was asked to send a photo of my room for a potential magazine story. We'll see if they pic it, probably not! It's about your bedroom. I took the pics and then had to describe my bedroom style.

This is one shot of my room, from the door way. 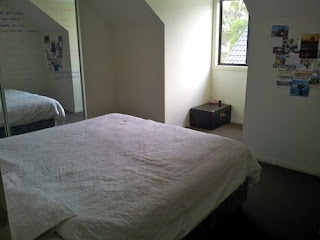 I have plain white sheets, plain white bedding and no extra pillows/throw rugs or anything. I have what I need, which is 2 pillows, blanket and sheets. It's is clean, simple and minimalistic. The cover has a raised line effect, but other than that is pretty plain.

On my walls I only have my vision board which is on the wall facing my door, so I see it as soon as I get to my bedroom. 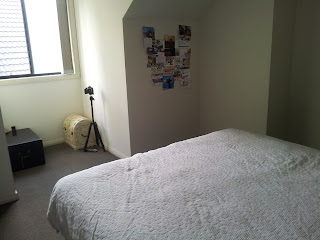 Under the window I have a chest of things, with a candle and my rose quartz on it. Opposite the oriental chest is another chest I was given with my name painted on it and my camera. 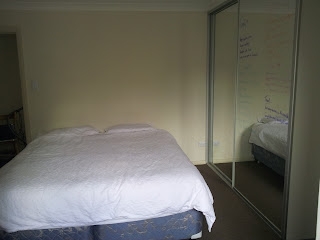 On my mirrored robes, well one of the doors, I have written all my goals for each section of my life.

My room is very plain, but I like it. It is a place I can relax in, focus on my goals, get motivation if I need and work without distraction.

I described my room as minimalistic, ambitious and simple. That's the style I wanted for my room. It doesn't show a clear personality for me, it is not overpoweringly mine and it is very adaptable. If I want colour I can add sheets and cushions. But I like it as it is.

What does your room say about you? What do you think of my room?
Posted by Kylie at 3:44 PM No comments: