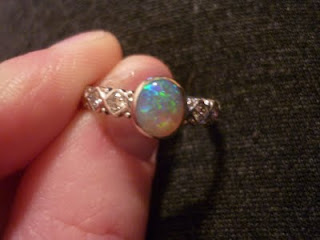 Don't you just love surprises? Today, as I was rushing out the door my husband said "Hang on!" I turn around and he had this ring sitting in its box, open. I was so excited. I knew he was buying me one, but I had no idea when I would get it.

The photo doesn't do it justice. It is a Black Opal, set in white gold with diamonds. I love it. I have wanted a black opal ever since I saw a TV show when I was a kid "Genie from Downunder" is what I think it was called. There was a Genie dad and his son that lived in a black opal.

Anyway, it is so nice to be surprised. Do you want to know why he bought it? NOt for an anniversary, Christmas or my birthday, it is just because he loves me!
Posted by Kylie at 9:15 PM