Bridge Climb and All Blacks game 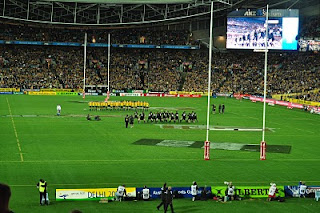 All Blacks doing the Haka
I had a huge weekend. It was stressful on the Saturday but totally worth it. I finally got to climb Sydney Harbour Bridge!

I almost missed my climb. I missed the turn and ended up going over the bridge. Sydney is shocking. I hate driving there. The traffic and streets are terrible. I rang the climb and said I was on the other side of the bridge but I won’t make it to be 15 minutes early for my climb like you’re supposed to be.

Lucky for me they were able to move my climb. So we went about 30 mins later than our original climb and it turned out to be the best thing. We went up one side and over the top. As we were coming down the other side the sun was setting and Luna Park and the rest of the city lit up. It was gorgeous and had we done our original climb, we would’ve missed all that.

After the climb we raced over to ANZ stadium to watch the All Blacks vs. Wallabies. The first hour of the game was terrible. (For me as an All Blacks supporter!) The All Blacks were making so many mistakes and I was wishing I hadn’t paid to see this game!

The with 20 minutes to go the All blacks finally kicked in to gear and came from behind to win by 1 point. The last few minutes of the game were intense for everyone. It was so fantastic.

Even better was it was a history making game. Why? Well, it was the 10th straight loss against the All Blacks for the Wallabies. The previous record was 9 straight losses.

The next morning I got to see my sister in law to be whom I haven’t seen for ages. She’s been really sick and lives on the northern Beaches, so nowhere near me. Hopefully when we move back to Syd I will get to see her more. Oh, yeah, my brother was there too. Lol. And I finally got to meet her brother. It was nice to put a face to the name.

I am so glad I finally got to climb the bridge. It has been on my list for ages and this weekend was the last time in a long time I would’ve been able to do it. Thanks to my parents for having my kids for the weekend.

Pictures of me on the bridge will be up later. My computer is being very annoying and I can’t do everything I want with it right now. Hopefully soon though. It is an awesome picture that will go on my fridge because I look so fat in it; it is a great motivation to not eat mindlessly!
Posted by Kylie at 11:10 AM