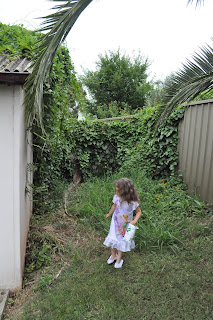 See this glorious picture of behind my garage? It was taken about 7 months ago. Yes, that is my 3 year old in the picture, in her favourite Tinkerbell dress!

Anyway, you can see vines galore right? Well, by the time I finally attacked them the other day they had grown to be covering virtually all the white of the garage you can see. Yeah, super fun right?

They covered 3/4 of the roof, all over one side, the back and part of the other side plus along the side of the fence and around back towards the palm tree. A LOT of vines.

I had been waiting on my husband to do it, but he has been quite exhausted from work. Also he is terrified of spiders.

I had already cut back our overgrown palm tree 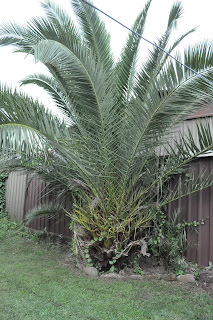 This is after I half cut it back. I've done more since. I'll get an after photo soon. This thing wanted to stab me to death. It contained numerous spiders and I suspect I may have been bitten. I felt a prick on my neck, but I had been stabbed so many times by the palm tree I did not think much of it. After about 5 - 10 minutes I felt really nauseous and tired. I took my daughters inside, put them to bed (it was their nap time anyway) and fell asleep. I barely woke when my husband got home. It was enough to grunt at him and pretty much pass out again.
When I awoke hours later I still felt sick, but better than I had. It was only then it dawned on me it may have been a spider. I'm a bit slow! lol. 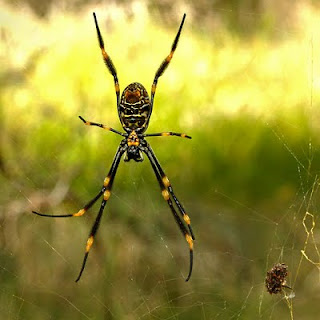 Back to the vines. I decided to pull them all down. Whilst I was going for it with my bare hands, it dawned on me "Oh, there's probably some spiders in here and I don't really need to get bitten again." (This was about 3 - 4 weeks after said spider bite, so you know, long enough to forget.)

As soon as I thought that, I saw one. He was a grey one and if he stretched out he was as big as my hand. So I went off and got my gardening gloves and continued hacking. I had to use the ladder to climb on top of the garage. I cut, raked and pulled that baby until I got all the wisteria and intertwined vines, spiders nests etc... off hte garage. Next I had the fence.

As it turns out, under all those vines, there was some wire fencing in there between the garage and the fenceline. It was nice and rusty and the vines had weaved themselves through it like no ones business.

So I decided to wiggle them out of the ground and hack the vines off there, then dig them out. As I was doing this I found a spider city. I am talking about the size of a soccer ball. Yeah, awesome.

I was so over this whole thing by now, I thought screw it. I shook the crap out of the vines, scared the spiders out and hauled that hunk of vine and rusty fence out of there.

I am proud to say this time I did NOT get bitten and this is why when gardening you should wear denim, gloves and cover up. (Too bad I forgot the hat and sunscreen and my face is now reminiscent of a tomato)

I piled it all up on the driveway, where I have the dozen or so palm leaves which are 2m+ ea in length.

You know what my husband noticed when he got home? The pile of crap. Not the clear garage, just the vines. And no, he did not put 2 and 2 together and go, wow, those vines must be off the garage since that is the only place on the whole property we have vines.

No. He thought, great, more mess!

Instead he should've thought "Thank you honey for spending 4 hours outside ripping the guts out of our garden so that it looks half decent and now I can paint the kitchen for you on the weekend whilst you visit your family instead of doing the garden. Gee I love you."

THAT is what should have crossed his mind. Not, great more crap on the driveway I have to clean up!

And FYI it is not him that has been cleaning it up. It has been me cutting the palm leaves into thirds so they fit in the green bin to be emptied each week. Me getting stabbed and being a feast for spiders.


Oh and in case you are wondering why I am not so scared of spiders, I'll tell you tomorrow. My dad was awesome. (ok, his method apparently only worked for me, not my other sisters)
Posted by Kylie at 12:43 AM